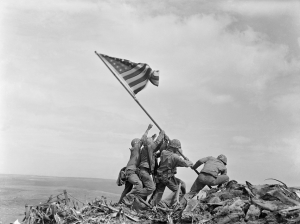 Raising the Flag on Iwo Jima, by Joe Rosenthal of the Associated Press

In this course, we will examine the United States from 1919 to 1945. We will look at the transformations over that period through cultural, political, diplomatic, and social lenses. We will begin in 1919 with the Paris Peace Conference and Woodrow Wilson’s ideas for a new world order. We will then examine the roaring 1920s and its many cultural and political changes by looking at such events like the Scopes Trial. Other topics to be covered closely in the course include the presidency of Franklin Roosevelt and his New Deal, along with the consequences of the Great Depression, American responses to the coming of Nazi Germany, the 1940 presidential election, African-Americans in the 1940s, the diplomacy of World War II, the atomic bomb, and the coming of the Cold War in 1945.

Andrew Chatfield received his PhD in US diplomatic history 2018 from American University in Washington, DC. He wrote his dissertation about the Americans who supported India’s national self-determination from 1915-1920. During his time in Washington, Andrew worked for organizations such as the Study of Terrorism and Responses to Terrorism (START), the Foreign Policy Research Insittute, Humanitites DC, and the Streit Council. At Lexington, he hopes to create a history class from which everyone will learn new material and gain new perspectives on American history.