A Study of The Civil War 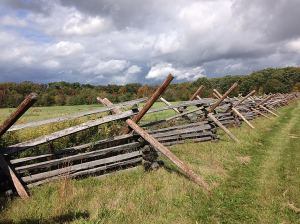 In this class we will look at the causes and origins of the Civil War while also parsing its long-term consequences. This class will focus primarily on the war years (1861-1865) with special emphasis on the political, cultural, and diplomatic aspects of the conflict. We will finish the class by taking a close look at the war’s aftermath with the unfinished revolution of Reconstruction and its many repercussions on the future of American politics, society, and culture. Some of the issues we will investigate in this course include: slavery, emancipation and freedom, race, gender and the role of women in the war and its aftermath, shifts in American labor, and finally historical memory. We will also try our best to answer some major historical questions that have been long debated by historians such as what caused the war? Why did the Union emerge victorious? And to what extent is the Civil War America’s defining moment?

Andrew Chatfield received his PhD in US diplomatic history 2018 from American University in Washington, DC. He wrote his dissertation about the Americans who supported India’s national self-determination from 1915-1920. During his time in Washington, Andrew worked for organizations such as the Study of Terrorism and Responses to Terrorism (START), the Foreign Policy Research Insittute, Humanitites DC, and the Streit Council. At Lexington, he hopes to create a history class from which everyone will learn new material and gain new perspectives on American history.