An Introduction to Latin Language Summer 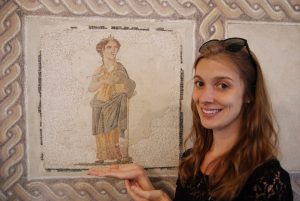 Did you know that your brain is wired to learn languages in the same way, whether the language is modern or considered “dead’? That Latin has been considered difficult partly because it’s been taught through verb charts and not meaningful conversations? Step into the time machine every week as we speak the language of the Ancient Romans to build mastery and read ancient texts, learning the grammar and vocabulary that are the basis of countless languages today. You will learn to read funerary inscriptions, graffiti, and unlock manuscripts, and see the connections to modern languages. This course is for learners with little to some prior knowledge of Latin.

As a Latin teacher and polyglot, Skye Shirley has crafted a Latin teaching method informed by recent research in language acquisition and her Masters in Latin Pedagogy from UMass Boston. She teaches engaging, hands-on, immersive lessons which use Latin as the primary language of instruction. She has worked for many years giving tours of Rome during the summers, and now has a deep knowledge of the city. As a “linguistic activist” she has created change in her field by addressing the long-lasting gender gaps in spoken Latin through her nonprofit organization “Lupercal” and by fostering spaces for women to have a voice in the ancient language.