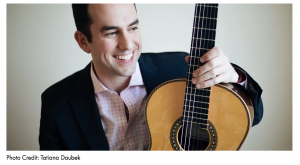 J.S Bach is one of the few composers across history whom transcends time and is revered by professionals, aficionados and music enthusiasts alike. Bach reimagined many of his own works for different instruments and chamber combinations. He reinvented himself and his music continuously. This lecture will shed light on the life and story of Bach, particularly as it pertains to one of his most beloved works, Lute Suite in E Major, BWV 1006a (also known as Violin Partita no.4 in E major, BWV 1006). Join Adam Levin for lecture/performance. www.adamlevinguitar.com

Note: In upcoming LCE terms, Adam Levin will give two additional lectures on the evolution of Spanish music and the music of English composer, John Dowland.

Praised for his “visceral and imaginative performances” by the Washington Post, top prize winning classical guitarist and recording artist Adam Levin has performed on four continents across the globe. Levin has performed extensively across the United States at renowned venues such as Chicago’s Pick Staiger, Nichols, and Mayne Stage concert halls as well as at the prestigious Art Institute of Chicago; Boston’s Isabella Stewart Gardner Museum, the Museum of Fine Arts, and Jordan Hall; Spivey Hall in Atlanta; repeat appearances at Le Poisson Rouge in New York City; and the Kennedy Center in Washington, DC. In Europe, Levin has performed in some of the finest venues across Spain, and in Italy, Germany, and Switzerland.  In the 2017-2018 season, Levin makes several debut solo, chamber, and orchestral appearances in China, Finland, and Ireland as well as return appearances in Brazil and Spain.  Adam Levin’s live performances have been featured nationally numerous times on NPR’s Performance Today, the nationally syndicated Classical Guitar Alive, and studio performances on top radio stations including WFMT Chicago and WCRB Boston.
​
In the 2016-2017 season, Levin toured across the US including a sold-out recital featuring commissioned new works for guitar by Spanish composers at the Former Residence of the Spanish Ambassador to the US in Washington, DC, presented by the US Fulbright Alumni Association (with the ambassador in attendance); the Art Institute of Chicago as part of the city’s Latin Music Festival, and a return engagement to New York’s Le Poisson Rouge.  Levin also served as artistic director of the second annual University of Rhode Island Guitar Festival and performed chamber music with Duo Sonidos at Charlotte’s Bechtsler Museum and with The Kithara Project Trio at Chatter in Albuquerque, NM, and in Austin, TX.  Internationally, Levin performed recitals in numerous venues in Spain, Hungary, and Austria in Europe and a debut tour of Brazil, where he was immediately invited to return for a second tour in 2017-2018. Additionally, Levin’s 2017-2018 season includes international debut tours in China, Finland, and Ireland.
​
The recipient of numerous top prizes, Adam Levin has been recognized by the Society of American Musicians, the Lake Forest Concerto Competition, Minnesota’s Schubert Competition, Boston GuitarFest, Concurso Internacional de les Corts para Jóvenes Intérpretes in Barcelona, Concurso Internazionale Di Gargnano, and Certamen Internacional Luys Milan de Guitarra in Valencia. For his promotion, interpretation and performance of Spanish music, he was nominated for the 2011 Trujamán Prize, in which only three guitarists worldwide are selected annually.
​
From 2008-2011, Levin was honored as a Fulbright Scholar as well as grant awards from the Program for Cultural Cooperation Fellowship (promoting cultural understanding between Spain and the United States) and the Kate Neal Kinley Fellowship, to research contemporary Spanish guitar repertoire in Madrid, Spain. His three-year residency resulted in a major collaboration with 30 Spanish composers spanning four generations, who each wrote works commissioned by and dedicated to Levin.  In 2012, production began on a four volume encyclopedic recording project with Naxos.  The first two recordings in the series, 21st Century Spanish Guitar, Volume 1 and Volume 2 have been released by Naxos to rave reviews from Classical Guitar Magazine, Soundboard, American Record Guide, and featured Recording of the Month and Recording of the Year awards from Music-Web International.  In November, 2017, Naxos will release Volume 3 of the series, with six world premieres of solo works dedicated to Levin, including pieces by three of Spain’s most renowned composers, Anton Garcia Abril, Leonardo Balada, and Cristobal Halffter, plus three works by rising composers Eduardo Morales-Caso, Laura Vega, and Jose Luis Greco.
​
Levin’s critically acclaimed discography also includes his debut album, In the Beginning [ALR, 2009], Music from Out of Time [La Communidad de Madrid, 2010], and Fuego de la Luna [Verso, 2011], the latter showcasing the complete guitar works of Spanish-Cuban composer Eduardo Morales-Caso, a composer whose music Levin has championed since the launch of his career.

An avid chamber musician, Levin has performed with orchestra, string quartet, and various instrumental and vocal duo combinations.  His primary chamber ensemble, Duo Sonidos, has been celebrated for bringing a fresh interpretation of chamber music to wide-ranging audiences across the globe while expanding the repertoire for violin and guitar through new commissions. In 2010, Duo Sonidos was awarded first prize at the Luys Milán International Chamber Music Competition in Valencia, Spain.  Their 2010 self-titled debut recording received rave reviews from Classical Guitar Magazine, Soundboard, American Record Guide, and a US Choice award from BBC Music Magazine.  The duo will be releasing their follow up recording in 2018 with folk‐inspired works by Béla Bartók, Xavier Montsalvatge, Karol Szymanowski, Lukas Foss, George Gershwin, and others.