Directing & Performing Swords on the Stage for Grades 8-12 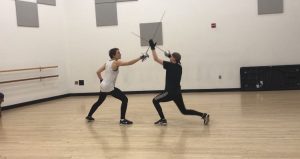 Explore swordplay in the world of performing arts and learn how Fight Directors make it come to life and tell a story! Throughout this course students will learn the basics behind swordplay for stage – both the physical actions as well as the process of how it all goes together in order to keep performers safe. Students will learn the physicality behind footwork, attack targets, and defense blocks. In the course students will also learn the differences and similarities between various sword styles – double handed swords, single handed swords, as well as swords that utilize a companion weapon. We will also cover how a fight translates to paper, how it gets choreographed, as well as analyze and discuss some sword fights from both popular film scenes as well as live demonstrations. Over the weeks of the class students will act as a fight director to work towards creating their own choreography to be performed by two classroom assistants!

Lauren Squier is a local Fight Director and teacher, and has taught in the summer Lexplorations program for two years.