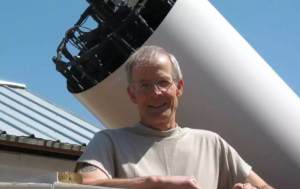 Don Pray is an amateur astronomer who has turned his life-long interest in all things “space” into the pursuit of double asteroid systems, also known as binary asteroids. He’s done this by assembling telescopes from off the shelf components as well as making many parts in his basement.

Don uses a technique called photometry (brightness measurements) to discover and characterize binary systems. In recent years, he has discovered the binary nature of more asteroids than any other amateur observer. He often collaborates with other amateurs and professionals and is a member of the Binary Asteroid Photometric Survey team conducted by Dr. Petr Pravec of the Czech Republic. Part of the survey’s mission is to determine the percentage of binaries in the general asteroid population, but also to determine other physical properties of these systems. These include the rotation rate of the primary body and it’s “moonlet” when possible, the orbital period of the system, pole positions and the relative diameters of the primary and secondary. He has recently brought on line a 25” diameter reflecting telescope. In 2003, he was the co-discoverer of the binary nature of the Didymos binary system, to which NASA has recently launched the DART impactor spacecraft to test how to alter the orbit of an asteroid.