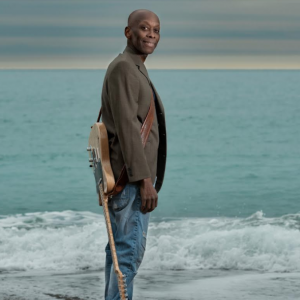 What better way to get away than to gather your family around the computer and sing favorite French songs from the 20th century on Zoom! Brice Kapel, Franco-Togolese singer-songwriter, live from the south of France, will introduce the songs, then sing while you do the same from the comfort of your living room (with muted microphone, of course.) Sign up at least a week ahead of time and we will email you the playlist with lyrics and music so you can practice!

Brice Kapel was born in Togo, a country in Africa that is about the size of New England. At the age of 8, along with his parents and six brothers and sisters, he left the red soil, sunshine and seashores of Africa for the gray skies of Paris. It was a radical change in lifestyle and climate. His mother, who was a schoolteacher, taught the children that they were now French and that they had to live like French children, eat like French children, behave like French children and work hard at school. Brice succeeded in following her advice, but he never lost the sound of the music that was deep inside him since birth. It wasn’t until his own son, Charly, was born that he was inspired to bring together the generations through his music, his songs, dance and stories. His music touches everyone, even the deaf and hard of hearing thanks to the beauty of French Sign Language that Brice incorporates into his songs. In his shows, he sings in French and in his native Mina. His shows, created for children and adults, blend the flavors and tales of Africa and also reflect the realities of today’s global society. His songs tackle themes dear to children as well as adults, such as education, childhood, screen time, love, friendship and the loss of loved ones. Brice Kapel knows how to get us moving and wake up our collective “joie de vivre.”

Karen Girondel has been teaching French her entire adult life. After 38 years with teenagers in the Lexington Public Schools, she has gone on to share her love of French language and culture among former teenagers, aka adults, through Lexington Community Education where it’s ok to make mistakes as long as we are communicating in the language of Tintin, Catherine Deneuve and Molière. Now that she is living in Portland, Maine, Karen is thrilled to be able to continue orchestrating conversation via Zoom. 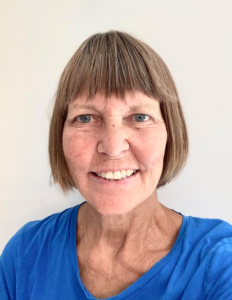