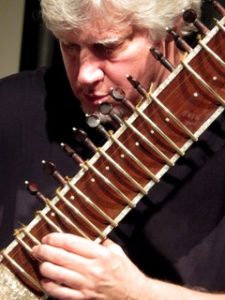 “Here is Kabir’s idea:  As the river gives itself into the ocean, what is inside me moves inside you.

Though the sky is clear of clouds, rain pours down, and there are whole rivers of light…”

David Whetstone is a disciple of the legendary sitarist, Ustad Vilayat Khan.  He has collaborated and toured extensively with poets Robert Bly and Coleman Barks, appearing with them in numerous recordings and films. David co-founded Ragamala Music &  Dance Theater and supplied original text, stories and music in both Indian and Western vocal and orchestral idioms, for critically acclaimed programs such as Ragamala, The Puppet Master, Canticle of Mary, and Ashoka, Beloved of the Gods. David has performed venues such Lincoln Center, the Cow Palace, the Metropolitan Museum of Art, and the Guthrie Theater.  The Rochester Symphony & Chorus premiered excerpts from his opera, White Nights, after Fyodor Dostoevsky’s short story, live on Minnesota Public Radio.  An American Institute of Indian Studies Senior Research Fellow, David’s first sitar training was with Dr. Brian Silver, and he has trained with numerous others, including vocalist Hafeez Ahmed Khan, Director of All India Radio.  David also has trained in Western classical music, having studied with Philip Meyers, Solo Hornist of the New York Philharmonic, for five years.  When Ravi Shankar died, National Public Radio called David for an interview about his passing.  Recent appearances have been with poets Li-Young Lee and Jane Hirshfield, writer Mirabai Starr, and theologian Matthew Fox.  David lives in Minneapolis, and is a Senior Lecturer at Carleton College.

“I love to read Rumi with David Whetstone playing. He is amazingly sensitive to the imagery and to the soulgrowth truths coming through.” –poet Coleman Barks

“I have infinite trust in David Whetstone’s music. I’ve never met anyone more sensitive to poetry and more able to go ahead of it into realms of delight and depth. He’s a master sitarist and one of the best artists of his generation.” –poet Robert Bly

“Whetstone’s one-man duet on the sitar…  He proved entirely capable of playing duets all by himself.  The interplay was far richer than would have been expected from a single instrument.” –Washington Post

“Opera concert definitely first class. Whetstone’s harmonies and orchestration were expressive and most beautiful. The music might be thoroughly modern but the poetic and emotional impact on the audience was remarkable.” –Post-Bulletin, regarding the opera White Nights, by the Rochester Symphony & Chorus, live on Minnesota Public Radio

“Ancient meets modern in spectacular Ashoka. Populist and emotionally charged… uses a variety of vocal techniques to produce a conservative but unusually effective, often stirring result.  Whetstone’s libretto tells the story with unfathomable depths of emotion and vision under the narrative. The entire production is first rate.”  –About the opera, Ashoka, Minneapolis Star Tribune

“We were listening to David Whetstone’s beautiful sitar playing, when David began singing quietly. His voice arose naturally and effortless in the purest ecstatic sound, so near and perfect to the sitar that there was no distance between them. I felt an indescribable joy. The song ended naturally as it had begun but left me longing. It was a transcendent experience.”  –Storyteller and Author, Gioia Timpanelli