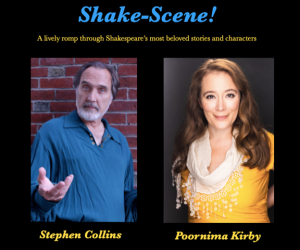 Join Shakspearian performers Stephen Collins and Poornima Kirby for a rollicking ride through some of the bard’s finest poetry and most compelling characters!  Featuring scenes and monologues from some of Shakespeare’s best known plays, including Macbeth, The Taming of the Shrew, Henry V, and Julius Caesar, this original compilation digs into universal themes such as the price of power, the risks of falling in love, and the what to do with a murder weapon.  The 1-hour show also includes a lively “sonnet duel,” plenty of playful banter, and fascinating historical context; and includes a question and answer session at the end. Come immerse yourself in Shakespeare’s wit, wordplay, and timeless verse!

Stephen J. Collins grew up in Cambridge, Massachusetts and received a BA in Literature from UMass Boston. He teaches seminars on Whitman, Shakespeare, Thomas Hardy, Robert Frost, and contemporary poetry at locations throughout the Boston area and also works as a professionally licensed tour guide there.