Slavery, Abolition and the Underground Railroad in Massachusetts 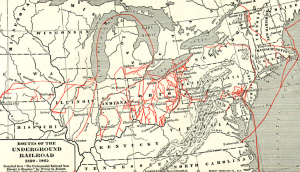 In 1765, Jenny Slew, who had been enslaved in Ipswich, was the first person in America to successfully sue for her freedom. The Massachusetts Supreme Court abolished slavery a dozen years later, but under the Federal Fugitive Slave Act, anyone who helped prevent the recapture of a runaway slave could be fined $1000.00. Tensions arose between ardent abolitionists and those who would rather avoid the discussion, dividing families, churches and communities throughout New England. Men’s and Women’s Anti-Slavery Societies were formed, and fugitive slave seizures in Boston of Shadrach Minkins, Thomas Sims, Joshua Glover, and Anthony Burns in 1854 sparked actions by anti-slavery activists known as the Boston Vigilance Committee. In Ipswich, the Meeting House Green neighborhood was a hotbed of anti-slavery sentiment. A network of the Underground Railroad ran north along the coast from Boston to Marblehead, Salem, Beverly, and Danvers, splitting into three trails, one continuing through Ipswich and Newburyport into New Hampshire. Ipswich town historian Gordon Harris takes us through the timeline of events on the national and local levels that culminated in the Civil War and the Emancipation Proclamation.