The Gilded Age and Progressive Era 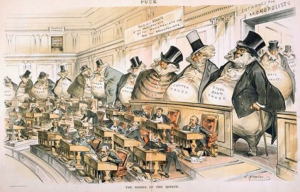 What was life like in America after the Civil War and the end of the nineteenth century? How did Americans adapt to the rapidly changing pace of culture, society, politics, and economics? What were some of the causes and effects of rapid industrialization, mass immigration, wealth inequalities, and economic depressions during the era? These are some of the questions we will seek to answer in this lecture course on the Gilded Age and Progressive Era. We will begin the course at the end of Reconstruction in the late 1870s and parse its many repercussions felt many decades later. Then we will analyze the issue of mass immigration to the United States and the racism and xenophobia it engendered. We will also examine the coming of the labor movement and look at several violent strikes, like the Homestead Strike and the Pullman Strike. Then we will look at the beginnings of the Populist movement in American society and the many economic hardships of the early 1890s. Let’s not forget the coming of the American empire during the Spanish-American War and the colonies the US acquired, as well as the new national viewpoints and attitudes that accompanied it. We will also look at the politics of the early twentieth century, keeping in mind that it was the most popular form of a hobby and popular entertainment for millions of Americans. Finally, we will examine the coming of Woodrow Wilson’s presidency and the effects of World War I on American society. We will finish in 1920 with the end of the Progressive Era.