The Single-Minded Way of Zen WITH MYOZEN JOAN AMARAL

In a stressful world full of uncertainty, establishing a trustworthy and true foundation of self can make all the difference. In the midst of society and the media seemingly intent on creating constant diversion, pressure, and distraction, it is possible to be peaceful, consistent, and fully present to whatever comes next. As Suzuki Roshi explains, a railway track is always the same, even as it covers and crosses all types of terrain. Join us for an evening with Zen priest and teacher, Rev. Myozen Joan Amaral as we discover, examine and practice some of the ways of sanity, solidarity, sincerity and centeredness offered by the time-tested practice of Zen meditation. 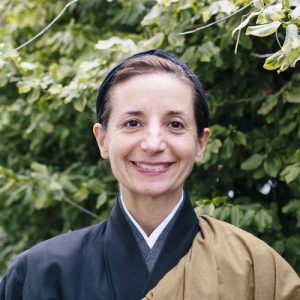 Myozen Joan Amaral moved to the Boston area in 2012 from San Francisco Zen Center to serve as guiding teacher for the Marblehead Zen Center. In 2014 the Zen Center relocated to Beverly and in 2016 changed its name to Zen Center North Shore. Joan is a dharma heir of Zenkei Blanche Hartman in the lineage of Shunryu Suzuki, Roshi. Her interest in zazen grew out of a background in modern dance and she continues to be interested in the ways that movement and the cultivation of energy can support the practice of stillness. Joan trained at Tassajara Zen Mountain Monastery for six years. While in residency at San Francisco Zen Center, she formed a dharma group – Dharma en Español – devoted to studying Suzuki Roshi’s Zen Mind, Beginner’s Mind in Spanish (Mente Zen, Mente de Principiante), in order to provide the opportunity for native Spanish speakers to hear the dharma in their own language. While in San Francisco, she led meditation classes at the County Jail where she also provided one-on-one spiritual counseling for prisoners. She is a graduate of Georgetown University in Washington, DC, and also completed the chaplaincy program at the Sati Center in Redwood City, CA, where she studied with Gil Fronsdal, Paul Haller, and Jennifer Block. Her primary focus as a Zen priest, meditation teacher, sangha leader, and community activist, is on the dynamic relationship between formal practice and everyday, messy human life. In recent times she has been exploring the relationship of zazen and social justice, self-care, and creativity as a path of true happiness.