Lexington Community Education and Shadaj, a Lexington based non-profit, collaborate to present: 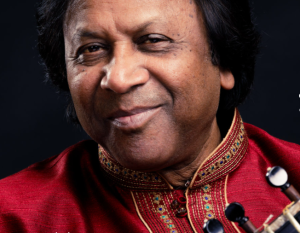 Ustad Shahid Parvez Khan is widely recognized as one of the greatest sitar players of the world. The recipient of numerous prestigious awards, including the Government of India’s Padma Shri and the Sangeet Natak Academy Award, Shahid Parvez Khan regularly tours across India, Europe, North America, Asia and Australia, enthralling audiences everywhere. Shahid Parvez’s music is both novel and evolving. His unique tone and astute artistic sense have become his hallmark as a respected performer and composer. The power of his music emanates from the highly charged sound he conjures on stage. He emphasizes the unique capabilities of this sitar itself while drawing upon numerous musical influences easily recognizable to a knowing ear. He has achieved success in not only preserving tradition, but also pushing its boundaries to even greater heights of aesthetic beauty. Shahid Parvez Khan represents the seventh generation of the sitar’s first family, the Etawah Gharana. A very young Shahid Parvez was initiated into the rich traditions of the Gharana by his father and guru, Ustad Aziz Khan – the famous musician and son of legendary sitar and surbahar virtuoso Ustad Waheed Khan. His family has produced the most revered and influential figures in Hindustani Classical Music including Ustad Sahabdad Khan, Ustad Imdad Khan, Ustad Enayet Khan, and Ustad Vilayat Khan. 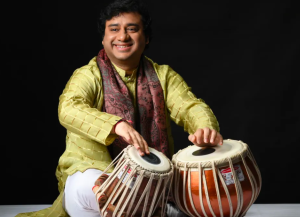 Accompanied on tabla by Aditya Kalyanpur. With Aditya Kalyanpur’s trademark blend of technical brilliance, creative improvisations and high-octane showmanship, this award-winning tabla virtuoso’s performances instantly connect with, and captivate audiences worldwide. Kalyanpur is noted to be coined as the original pioneer of recreating the colorful tabla, thus innovating, “a more colorful expression.” At the same time, Kalyanpur’s performances reflect his versatility and keenness to break through conventional ‘borders.’ Kalyanpur has uniquely gone on to acquire in-depth knowledge across various gharanas and schools of playing. Furthermore, he is in his element when adapting masterfully to any musical context, be it complementing a sitar or jazz guitar, and/or collaborating with artistes across genres, from jazz to pop, rap to rock! Hailed by many in the western world as “the rightful heir to Punjab Gharana,” *Aditya’s colossal repertoire, and his signature style of bold execution of syllables and pinpoint-precise rhythm, are founded in rigorous study and knowledge. For the child prodigy who could replicate intricate rhythmic patterns on his first tabla at the age of 3, there was no going back. Kalyanpur’s training began from none other than the legendary late Ustad Allah Rakha.

Shadaj is a 501(c)(3) non-profit organization, founded and operated by a group of volunteers from Lexington, MA and the greater Boston area. For more information, and to view the Shadaj complete concert calendar visit www. Shadaj.org.