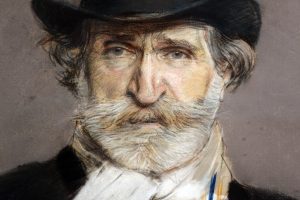 Like great literature, the great operatic masterpieces can use the themes of Politics, Psychology, Religion and of course Love, as motivating factors or hindrances. This holds true for both serious and comic opera. Our class will deal with five operas; “Tristan and Isolde”, “The Mastersingers of Nuremberg”, “Parsifal”, “Ariadne auf Naxos” and “Don Carlos”. Each of engages with two or more of the above mentioned themes. And the last two operas are being shown in selected movie theaters as part of the Metropolitan Opera’s HD series. Wagner’s “Tristan and Isolde” delves into the erotic psychology of the two main characters whose love goes beyond and brakes all conventional norms. And so does the music which lays the groundwork for the atonal music to follow. We will also look at the famous/infamous “Tristan Chord” and hear why it stands out in music history. Not all comedies are slapstick. The best ones present the foibles and follies of human beings with smiling eyes and human understanding. “The Mastersingers of Nuremberg” is such a comedy. Walter and Eva want to marry but Walter needs to win a song contest first. To secure the help that Walter needs, Wagner creates one of the greatest bass characters in all opera – Hans Sachs.This opera is full of arias, chorales, choruses, dances and a glorious quintet – tunes that you can hum after the opera. “Parsifal” is a unique opera. It uses the symbols and rituals of religion to take us into a different realty – a reality in which compassion is the highest value. In creating this music drama, Wagner combines various Grail myths and he makes the orchestra of prime importance. The Metropolitan opera is presenting Richard Strauss’ opera “Ariadne auf Naxos”. By mixing musical styles, Strauss successfully juxtaposes low comedy and high tragedy. A high point of the opera is the extremely difficult coloratura aria “Grossmachtige Prinzessin” . We will watch Beverly Sills perform this aria with the BSO. “Don Carlos”, based on a dramatic poem by Schiller, is Verdi’s most complex opera. And, the MET is also presented in HD. It will be sung in French – the opera’s original language – for the first time in the MET’s history. In ”this opera, Verdi explores how the conflicts of politics, religion, authoritarianism, liberalism and love affect the nation, the rulers and the common folk. True to his Italian heritage, Verdi fills the opera with arias, duets, choruses, and ensembles. One of opera’s greatest confrontations is a duet for the two basses – King Philip ll and the Grand Inquisitor. We will take two sessions to cover this mammoth work. Class meets on January 18, February 1, 15, March 1, 15, 22.

David Collins has been lecturing on opera in the greater Boston area for over 25 years. He had been Opera Boston’s resident lecturer for 8 years. He has given opera courses at MIT, Regis College, The Boston Center for Adult Education and The Cambridge Center for Adult Education as well as lecturing at Northeastern University. Dave is currently a trustee of The Boston Wagner Association. Dave received his Bachelor degree from Boston University’s School of Music, his Master’s from Lesley University and did post grad work at the New England Conservatory and the University of Connecticut – Hart School of Music.