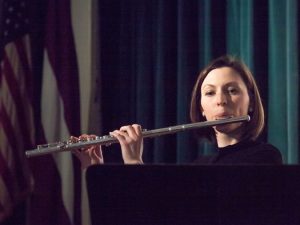 Ona Jonaityte is recognized for her “exceptional talent, poise and drive, as well as technical achievement and the ability to communicate devotion to flute music through performance”.

Currently, she is piccolo player with the Indian Hill Symphony and a member of Vento Chiaro Woodwind Quintet. She has performed with various orchestras, including Boston Symphony, Detroit Symphony, New World Symphony, Lexington Symphony and Boston Lyric Opera.

In 2010 she received the Artist Diploma in Performance and in 2008 the Graduate Performance Diploma at The Boston Conservatory where she studied with Mrs. Linda Toote. In 2004 Ona studied in France at The Lyon National Conservatory of Music and Dance with Mr. Philippe Bernold and Mrs. Emannuelle Reville. In 2006 she graduated from The Lithuanian Academy of Music and Theater with Master in Performance and Teaching where she studied with Mr. Algirdas Vizgirda

Since 2009 Jonaityte has been teaching and performing at The Boston University Tanglewood Institute. She is a President of the James Pappoutsakis Memorial Flute Fund and the faculty at Brimmer and May School and Sherwood Middle School.