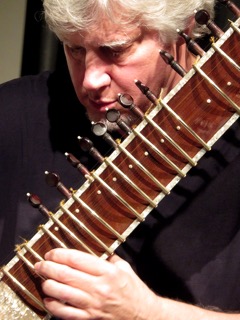 David began to teach for the University of Minnesota at the age of nineteen, and he has evolved methods that particularly enable an adult beginner to advance rapidly.  David’s  training in both Indian and Western classical music facilitates good communication of the ideas and concepts of sitar to young and old pupils.  David can help you acquire a sitar – please be sure to contact him before getting one!